One out of every six people on earth is between the ages of 15-24, says the UN. That is 1.2 billion youth.  As one young leader says, “if the world’s problems are to be solved, it’s not going to happen without us.” Yet in 2015, the International Labor Organization said 73.3 million youth between 15 and 24 were unemployed. Not only do and an estimated 169 million young workers lived on less than $2 a day, 75 percent of youth workers are only informally employed.  In Africa alone, the UN estimates 200 million are such youth; not only does Africa have the youngest population in the world, this figure will double by 2045, but the largest numbers remain in Asia (IMF 2015). The World Bank has striking African and Asian demographics: 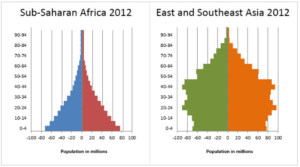 How often do we fund projects that are designed and run  by youth? How engaged are youth in sustaining the projects we have funded, designed, implemented, monitored and evaluated?  What have we in global development, including corporate social responsibility and investing spheres done to ensure that youth are both engaged in our projects, but are in the leadership to direct how they are done now, and sustaining them beyond donor departure? Further, how well are we collaboratively developing technology with them for them to use to thrive in this sped-up, high-tech world?

Valuing Voices youth blogs covered the barriers to youth success in the ‘developing world’ which included a lack of access to sufficient numbers of jobs, compounded by a lack of job-appropriate skills, access to capital, decision-making etc.  We heartily agree with the IMF that “youth have a huge stake in bringing about a political and economic system that heeds their aspirations, addresses their need for a decent standard of living, and offers them hope for the future…. [Also] that communities, cities, provinces, and countries can set up forums for the purpose of listening to the concerns and ideas of adolescents and young adults and stimulating change. Young people could be offered a voice in decision-making bodies…Inclusion can benefit all.”

Why should we make this happen? Taking inclusive steps fosters sustained impacts long after we grow old.

As CRS Niger’s otherwise very successful Sustained and Emerging Impacts Evaluation of the food security project shows us, there is much room to grow in inclusion of ‘youth’ (up to age 35 in Niger), both by including youth:

Versus not engaging youth:

Investing in youth is a terrific investment in sustainability. How often do we consider it?

A post-project example from Mercy Corps/ PCI’s early ex-post evaluation in Central Asia showed that such investments are not easy but can pay off after the project closed. “72% of youth report that they continue to use at least one skill they learned during the [infrastructure] program”… including teamwork and communication, sewing, construction, roofing, journalism and cooking.”  This may have been in part due to the project’s youth summer camps, organized each year to promote youth leadership and participation in community decision-making, which were supported by [some of] the adult population. While the project “encouraged communities to elect young people as representatives…within the cultural context this was not met enthusiastically by the communities because young people were not felt to be ‘qualified’ as leaders.” Yet inter-generational collaboration was fostered by the project by establishing mentoring programs where older people with technical skills mentored [some] young people during the infrastructural construction activities.”

Raj Kumar, Founder of Devex and chair for the World Economic Forum said this about what to do post-Davos: “With a dozen years to go before the finish line of the Sustainable Development Goals, we need to get the underlying plumbing right in order to have a chance to reach those goals. That plumbing includes everything from having the country-level data to track progress against the goals to having the project-level data to know what’s working and what’s not…. Most importantly, it’s about the development leaders of today building out the best systems so the development leaders of tomorrow can focus on delivery.”

What we at Valuing Voices are most encouraged by is the prospect of overtly considering sustained impacts to inform the funding, designing, implementing, monitoring and evaluating of projects today for the adult millennials of tomorrow. Regarding youth, we will need a mix of focused initiatives such as longstanding work by the International Youth Foundation, and new investments funds such as the Global Youth Empowerment Fund and integrating youth into projects at all stages of the projects and beyond, as we showed regarding CRS and Mercy Corps/PCI, above.

That is one way to get SusROI (Sustainable Return on Investment).

As mother who has worked in 26 countries, I feel the great urge to harness youths’ yearning to succeed through their love of technology. The growth of mobile money in Africa is one example of technology use in daily life. Who is supporting youth employment in technology?  Mercy Corps’ 2017 Social Ventures Fund that supports “positive trends offered by technology. Trends in micro-work, micro-manufacturing, digital livelihoods and mobile-enabled agent networks are paving the way for the acceleration of a distributed and digitally enabled workforce and the reinvention of manufacturing, sales and distribution. Their investments related to youth employment are:

I dream of youth crowd-sourcing post-project sustained impact results.  Feedback Labs has a lot of really interesting tools for… feedback from people on the ground in-country. I searched high and low and found only this crowdsourcing data collection overview of three aid research tools for ICT4D (information and communications technology for development), the best of which appears to be Findyr. (FYI here is feedback on the limitations of crowdsourcing in emergencies.)

Also, the ‘impact tracking’ platform by Makerble looked good but who among you have a wider perspective to advise us what’s best?

Finding technologies and funding to hear youth’s voices and feedback on what they could sustain or could not after our projects closed, and why is unbelievably valuable to inform funding, design, implementation, M&E, and of course foster youth empowerment.  Good listening to participants comes first. As an impact evaluation in Uganda found that “when villagers and teachers, instead of school officials, are allowed to set their own priorities for improving schools and directly monitor performance, the results can be priceless. In Uganda, World Vision knew that community-based monitoring of school performance could help sustain improvements in education that building schools, supplying textbooks, and training teachers alone could not. They tried two approaches: the use of a standard scorecard with performance questions identified by education officials and development partners, and a participatory scorecard, where community members defined the issues they would monitor. A randomized controlled trial [RCT] revealed that the participatory scorecard delivered more than the standard scorecards. The participatory approach prompted higher efforts by teachers, as expected. But it also prompted higher efforts from villagers— local politicians learned more about their country’s education policies and what they could advocate for on behalf of their constituents, parents increased their support of schools by contributing to midday meals, and children found a forum to report teacher absenteeism and other factors that hurt their education. In the end, while the standard scorecard made little difference in school performance, the participatory approach improved attendance by teachers and students and helped raise student test scores.’”

By accessing mobile technology, ground-truthing project sustainability, given youth’s familiarity with technology and network-interconnected habits, I believe together we can cost-effectively democratize evaluations and help ‘development’ be ‘sustainable’. Collaborate with us!