Having just come back from evaluation and design fieldwork for an Ethiopian Red Cross (ERCS)/ Swedish Red Cross/ Federation of the Red Cross and Red Crescent project, the power of communities is still palpable in my mind. They know what great impact looks like. They know what activities they can best sustain themselves. It’s up to us to ask, listen and learn from them and support their own monitoring/ evaluating/ reporting. It’s up to us to share such learning with others and to act on it everywhere.

There are a myriad of possible sustainability indicators, and the outcome indicators below, suggested by 116 rural participants from Tigray, Ethiopia seem to fall into two categories of expected changes: Assets and Life Quality (Table 1). As the food security/ livelihood project extended credit for animal purchases, it is logical that tracking increased income, savings, assets, and home investments plus expenditures on food and electricity appeared.

We gleaned this from discussions with participants, asking them “what can we track together that would show that we had impact”? Our question led to a spirited discussion of not only what was traceable, but also what could be publicly posted and ‘ground-truthed’ by the community. Discussing indicators led to even deeper conversations about the causes of food insecurity which were illuminating to staff.  What was surprising, for instance, was the extent to which families saw changing seasonal child-field labor practices in favor of 100% child-school attendance as great indicators.  School attendance (or lack thereof) was dependent on families’ need for children’s seasonal labor in the fields. Community members said they knew who sent their children or not, which no only ‘cleaned’ the publicly posted data but triangulated implementer surveys and opened room for discussions of vulnerability. 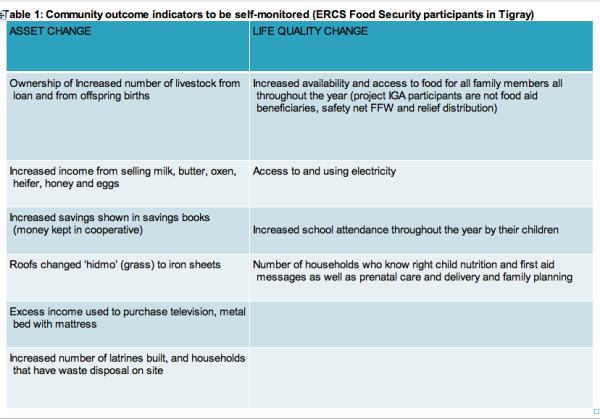 Not only is this exciting for the project’s outcome tracking but even more importantly, our team proposed to create a community self-monitoring system, suggested in by Causemann/Gohl in an IIED PLA Notes article– “Tools for measuring change: self-assessment by communities” used in Africa and Asia. This learning, management and reporting process will fill a gaping need as current “monitoring systems serve only for donor accountability, but neither add value for poor people nor for the implementing NGOs because they do not improve effectiveness on the ground.” The authors found that not only “participatory data collection produces higher quality data in some fields than standard extractive methodologies [as] understanding the context leads to a higher accuracy of data and learning processes [which] increase the level of accountability… “ but also that such shared collaboration builds mutual learning and bridge-building.” While our community members may have offered to track this publicly to make this partner happy, men and women discussed this excitedly and embraced the idea of self-monitoring happily. ERCS will be discussing with communities to either track data monthly in notebooks or on a large chart hung in the woreda office for transparency.  Data (Chart 1) would include these asset and quality of life indicators as well as loan repayments (tracked vertically) while households (tracked horizontally) could see who was meeting the goal (checked boxes), not meeting it fully (dashed boxes) or not meeting it at all yet (blank boxes).  Community members corrected each other as they devised the indicators during our participatory research and this openness reassures us that the public monitoring will be quite transparent as well.

Further, what was especially satisfying was getting feedback from across the three tibias (sub-regions) on what activities they felt they could sustain themselves irrespective of the project’s continuation. Table 2 shows us which activities communities felt were most self-sustainable by households; these could form the core of the follow on project. Sheet/goats, poultry and oxen for fattening were highly prioritized by both women and men, in addition to a few choosing improved dairy cows. The convergence of similar responses was gratifying and somewhat unexpected, as there were several other project activities.  The communities’ own priorities need to be seriously considered as currently they get only one loan per family and thus self-sustainable activities are key. 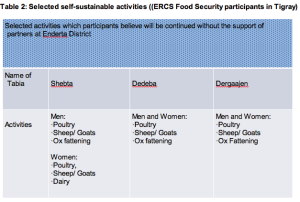 There is more to incorporate in future project planning by NGOs like Ethiopia’s ERCS. The NGO-IDEAs concept mentioned above also includes involving project participants in setting goals and targets themselves, differentiating between who achieved them and why, and brainstorming who/what contributes to it and what they should do next. Peer groups, development agencies and any actors could collect and learn from the data. Imagine the empowerment were communities to design, monitor and evaluate and tell us as their audience!

And they must, according to ODI UK’s Watkins, who has a clear vision on how to achieve a global equity agenda for the post-2015 MDG goals. He suggests converting the principle of ‘leave no one behind’ into measurable targets. He argues that, by introducing a series of ‘stepping stone’ benchmarks, the world can set ambitious goals on equity by 2030. He writes, wisely, that “narrowing these equity deficits is not just an ethical imperative but a condition for accelerated progress towards the ambitious 2030 targets. There are no policy blueprints. However, the toolkit for governments actively seeking to narrow disparities …has to include some key elements [such as] identifying who is being left behind and why is an obvious starting point. That’s why improvements to the quality of data available to policy-makers is an equity issue in its own right”. Valuing Voices believes who creates that data is an equally compelling equity issue.

So how will we reach these ambitious targets by 2030? By putting in stepping stone targets, returning project design functions to the ultimate clients – the communities themselves- and matching their wants with what we long to transfer to them. In this way we will be Valuing their Voices so much that they evaluate our projects jointly and we can respond. That’s how it should always have been.

What are your thoughts on this? We long to know.