Gender as a concept is one of the many kinds of indicators of change measured in development projects. However, like many others, its reporting in many cases is limited to the number of women and men participating in the project. Whereas participation by gender is an important variable in measuring community engagement and inclusiveness in a project, this measure is more focused at the registration level and the mere fact that women’s or men’s names appear in the registers. However, numbers only are not a clear indicator of participation and the extent to which it happens.

Gender reporting, as shown above, can be too simplified. There is also ongoing misunderstanding surrounding gender, which only separates genders and omits a gendered analysis that would help understand the relationships between men and women, boys and girls within the dynamics of a project. This can include differentiated decisions about how resources are allocated within household expenditures (e.g. women overseeing food consumption, health and children’s expenses versus men overseeing large investments into livelihoods) and division of labor (e.g. men ploughing and planting fields and women weeding and conserving crops leading to a family harvest). Gender negotiations are richer than numbers of men and women participating in projects.

As we consider the various stages of a project, starting from design, implementation to evaluation and sustainability, it is critical to assess the role of gender in each of these stages. It is obvious that women and men play important roles in projects but what is not clear is how these roles build, complement and sustain the project. The questions that come into mind after interacting with communities during project evaluations (mid, endline, impact and sustainability) are:

These are important questions that need to be answered through more research and writing but there are early insights I have learned:

1. Resilience in roles during the project life cycle

Studies highlighting the roles played by both women and men in projects shed light on how gender shapes project outcomes. I once attended a dairy project launch exercise in Kenya, my home country, and was surprised by what I saw. All the men sat at the front and the women took a back seat with their young children. The women remained silent the entire time the meeting was held, and efforts to involve them were unsuccessful.  I later learned that in that community, women do not share their views in the presence of men. However, I left with one question in my mind, how will this project succeed if only one party is going to be talking and making decisions? Was there no mechanism for women to share their views as well? Is it not going to become a project that benefits men only? Years later, I got an opportunity to evaluate the project. I held both men and women focused group discussions separately.   I found that firstly, men may be the gatekeepers but may not necessarily have the resilience needed to push through the whole project cycle. For example in this particular project, men did not continuously stay with the project, as noted by one female group participant:

“When this project started, we were both men and women. However, men decided to pull out because they thought milk was a women’s commodity and there was no money [to be made] in it. The women got organized in groups and started selling the milk in bulk. We made money and within no time, the men came back and took over the milk business. If we women had not stayed in the project, the milk business would not have been realized although we lost it to the men”.  In another dairy-related project elsewhere, the men were the cattle and milk owners so they sold all the milk. But during a season when the market was flooded with milk (milk glut), the men abandoned the milk business.  The women took it up and tried to sell the milk whenever possible until the milk glut’ season passed, only for the men to get back to the milk business again.

Whether it is a good idea or not for men to have taken the milk business away from women in both of these cases is subject for discussion, but the main issue here is the role played by the women to sustain the project long enough to grow it from an idea and push it into a viable business that attracted the men back into the project. Indeed one wonders if the project would have grown if the women had not remained in the project.  Valuing Voices at Cekan Consulting found the same in an all-women and highly successful sesame seed production Catholic Relief Services project in the Gambia. Women had grown the communal agribusiness from microenterprise size to being so successful that they became of interest to local banks. At that point, men in the communities began to take the project, and savings, over. Valuing Voices has documented savings and loans sustained post-project, and even scaled up by women in several countries.

Also thinking about the initial community entry meetings and seeing how unengaged and distant the women appeared, one would have dismissed their role in the project. As it turned out, women became the engine of this project.  Surface impressions may not hold true. 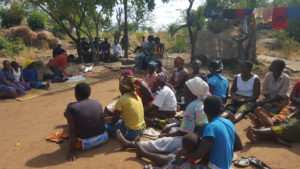 2. Saving the project for whose benefit?

In another project, community members were encouraged and supported to start savings and lending groups to run their small businesses. The qualitative discussions in the final evaluation revealed that at the end of the project, it was perceived as more of a women’s project in spite of being targeted to men.  This is because almost all the men had left the project after taking loans and failing to repay. The women, especially those whose spouses had taken the loans took over the burden of repaying the loans which saved the project.

Borrowing from these examples one is tempted to ask, what happens in those projects that target men only or where women get demoralized and leave? Do they fail at a higher rate altogether than those that include women? Arguing along these lines one would ask, what are the driving forces for men and women to remain or quit from project activities and how has this been addressed so far in project designs?

In most of the evaluation projects Ronto Research has conducted around Africa, men may take a lead in project implementation depending on their expected quick/ shorter-term gains/ expectations which determine whether they remain active or not. On the other hand, women seem to get into projects with a determined resolve to see their problems solved, no matter how long it takes. As a result, they hold onto the project activities despite the challenges that come along.  It is observable though, that as they progress and begin to take hold and show signs of success, the men get attracted back.

In most of the project evaluations I have participated in, there are always few men who are loyal and remain part and parcel of the project. Pivotally, we also need to understand the role of these few men who have remained in these projects with the women the whole time. This can be either because they hold positions or just because they believed in the projects and they support the women with ideas or just their mere presence in the project activities. These men seem to play a critical role in encouraging the women to push on. Their role cannot be ignored and there is need to understand them better in terms of their opinions. Why do they remain with the women even when there seems to be few benefits forthcoming to them, whereas their fellow men pull out? In an interview with women in Tanzania on an agricultural project, some women felt that the few men who had been left in their group were very instrumental in their achievements by giving the project an identity in as far as it being a community and not a ‘women-only’ project was concerned.

Thirdly, while conducting evaluation interviews, gender counts. Typically, women and men are asked about results in gender-specific groups. At the household level, the preferred interviewee is the household head. In most cases, they would be the direct ‘beneficiaries’ (participants) of the project information on behalf of their households. Due to the cultural set-ups in much of Africa, in married families, men are automatically the household head, which would mean they would be the target interviewees. However, our experience during interviews either through Focus Group Discussions or on a one-on-one situation is that consulting with women as well as considering differentiated gender roles and gender relations are key missing ingredients. For often during interviews, the men end up involving their spouses for details about projects, in part because men might not consistently follow up the project activities and therefore might not have all the details.

There is also a possibility that although it is the men who are registered as participants, in actual sense it is the women who participate and therefore have the detailed information about some issues being discussed, so it is important to check who is the actual ‘information bank’ (and day-to-day participant) of the household for the project.  This issue needs to be explored in-depth both in regular project evaluation and more needs to be learned about how this can be used to inform sustainability studies. Asking only men or only women may limit evaluative learning.

4. Sustaining results – which gender is best?

What can we learn from the projects that have been completed so far years after they close out?  When projects come to an end, communities are left to experience and foster the project impacts on their own. They learn a lot on their own post-project and this could be an important source of information on sustainability, but what mechanisms can be put in place for these ‘information banks’ to share the information long after projects end?  They may be the only key informants that remain (as partners may have long gone onto other projects far away); before the knowledge they hold that can be eroded with time. It would be interesting to compare the information held by men and women about outcomes and impacts being sustained, stopped or new ones emerging. The question on information especially related to project sustainability is going to be very critical considering that most of this information has to be sought from community members post-project period.