“Free” resources? How many (no-comment) strings are attached?

"Free" resources? How many (no-comment) strings are attached?

Is aid really free? We offer communities, households, individuals a lot — training, in-kind resources such as seeds/ tools or clean water dispensers, etc.  We also ask some in return, as that makes sense. We ask for in-kind labor (such as gathering gravel, sand to make up concrete or to improve paths to roads), and most importantly we ask for time, which may be some of our participants' scarcest commodity. 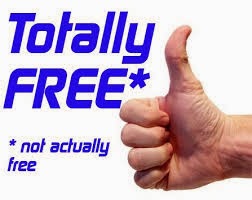 I thought of this because of Google+ links to Blogger.com – and while Blogger.com is free, there are strong strings tied which force those who wish to comment, to join Google+. I had no idea logging into my blog to post comments would require others to join Google+ (I was already a member as was my one other friend who commented).  I wondered, why was I getting no comments on my blogs? Were these topics of no interest to anyone? Well, my saavy friend Mary persevered and told me of the barrier. Then it took time to unstring myself and this blog from Google+. (Don't get me wrong, I love Gmail, but having this tied limitation hidden is pretty sneaky, nasty even, deeply Google+ self-serving).

In the same way, we tie aid in a myriad of ways. US food aid must be purchased (we have no more surpluses) and shipped on US-carrier ships and used by US international non-profits (distributed or sold) as well as the UN's World Food Program. A 2011 GAO study found that food that was shipped in this way and sold in another country for the cash proceeds to be gained by the non-profit for programming was uneconomical "The process of using cash to procure, ship, and sell commodities resulted in $503 million available for development projects out of the $722 million expended…. Ocean transportation represents about a third of the cost to procure and ship commodities for monetization, and [U.S.] legal requirements to ship 75 percent of the commodities on U.S.-flag vessels further increase costs."

We are not the only ones to benefit from giving aid. At a World Food Summit in the late 1990s which I attended in Rome representing the international non-profit CRS, some Scandinavian countries pledged seafood, Asian countries pledged technology (which were their high-tech brands) and we pledged wheat. None of these food commodities are particularly appropriate as they are not locally eaten and unfamiliar, but they were surpluses which these countries were willing to give away. A subtext of the technology was creating demand through this 'free' gift, much as our wheat donations to Nigeria after the Biafran war 40 years ago created a huge – and continuing- import demand for bread. While advocacy and research groups have illuminated and stopped the most egregious misuse of our taxpayer funds, and international non-profits also hire huge numbers of local staff, infrastructure, and channel resources into local economies, we must look deeply.

It is possibly the time 'string' that I find so frustrating because it is most hidden. As much as my time is valuable to me (and tracking down the free-the-comments took two hours), that much more it is for overworked poor households worldwide. Sometimes they are asked to walk miles to central distribution sites, change their marketing schedules to wait for trainers to arrive, come to meetings late in the day which is especially hard for women. Our aid competes with so many priorities of food or income production, childcare, eldercare, etc; they are much like ourselves but with far less power.  The best non-profits plan around people's schedules, bring distributions to them, ease their workload to interject additional responsibilities, ask them what their priorities are, rather than ours.

I am grateful for one thing I did get for free, which was advice from two bloggers (how to disable my Google+ to enable comments www.mayura4ever.com, www.jenniffier.blogspot.com. Thanks.

So how have you all found strings attached in your work?