Face our fears! Learn from failure…

Face our fears! Learn from failure…

Global Giving has a nice example about getting participant feedback success/ failrure of a project their fundraising funded. The organization failed which was sorrowful to the players in West Africa and funders worldwide (I too am a soccer-mom). Yes, it failed. It is hard to read those words and all involved faced it and they learned from it. Thanks to a sprited discussion on Pelican Platform for Evidence-based Learning about a plethora of unintended impacts, I learned about the organization committed to learning from failures: Admitting Failure.

Maybe some of you have heard of FailFests, such as the one in Raleigh N.C US this year that answered "Why are we doing this?" with "We’re on a mission to erase the stigma around failure. The more we talk about it, the more we can learn from it. Failure doesn’t have to be fatal!" You may know Engineers without Borders Canada has been an early proponent of "openly acknowledging failure is often a catalyst for innovation that takes our work from good to great."  Such examples are heartening, especially for participatory sustainability evaluation. 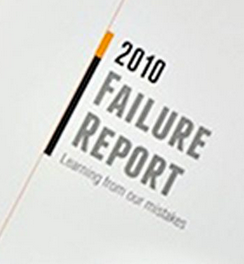 In 2014 a met a fellow evaluator at the American Evaluation Association Conference where I was presenting on Post-Project Sustainability Evaluation. They told me their organization was waiting for a really successful project to end so they could evaluate its sustainability. Another evaluator told me of a post-project evaluation that was hidden away, unpublished, after findings were negative. And that's where the problem lies: our international development industry's neurosis about presenting anything unsuccessful.

No wonder so few projects have been evaluated post-project, as we fear:


* What if activities and outcomes aren't sustained (note: we didn't design them that way, often we opt for quicker wins achievable only with large resource inflows of funds and technical help)?

* What if our funders find out that funds had limited impact or partners had no means to continue good programming?

* What if we had entirely unintended impacts that favored some over others (well beyond our expected logical frameworks and Theories of Change)?

Hallelujah 🙂 Why can't we see this as good news that propels us to improve our projects by listening to what worked? To learn not to do what didn't work again?! To design in locally sustainable ways now that we have learned?


* What if we learn that our resources and empowerment led them to succeed on their own terms in ways we couldn't imagine, far exceeding the planned impacts we had expected?

* What if we find that unexpected outcomes showcased ways groups within communities stood on their feet, making development work for them on their terms?

Would we design and implement, monitor and evaluate projects differently? We'll see. Organizations such as USAID’s Food for Peace funded a four-country study on exit-strategies (forthcoming 2015), are looking at success and failure. Catholic Relief Services hired Valuing Voices to do sustainability evaluation in Africa. Others may follow…

Post-project sustainability evaluations expose us to learning the full range. Let's be brave and ask, learn and innovate, making aid and philanthropy more effective, and learn from failure for success!