Unintended development program impacts – how much do we know about what they are and how we could learn from them for future programming? How often do we even question our assumptions about what we meant the programming to bring and result in, versus what actually happened?

I had the privilege of consulting to Lutheran World Relief from 2005-2007 in Niger on a drought resilience and rehabilitation project.  IIED's PLA Notes just published my write-up of this baseline and slightly ex-post (6 months after closeout) final evaluation funded by the Bill and Melinda Gates Foundation.  I led a team doing mixed-method interviews (that means tracking numbers finding out how many, how much impact we had, combined with listening to words explaining why things worked out this way, or not).  There were numerous lessons lessons learned from targeting sheep, wells and animal fodder to 600 of the poorest women in 10 communities in northern Niger.  Among them were that LWR's programming did some real good, especially due to great knowledge of the herding communities via national staff. 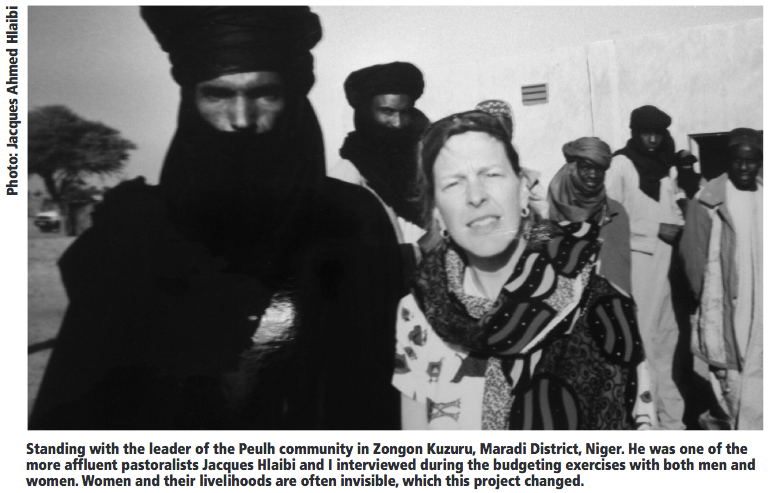 The main two project goals had to do with whether the communities were more resilient against future drought and were they more sustainably food secure thanks to the assets (sheep, water, fodder), income (future sheep, sale of fodder) and training (management of sheep and maintenance of water points).  The answers seemed to be generally yes.  We found that women's share of household income increased from 5% to 25% in some households. This was due to the sheep, as well as time savings used for income generation (a staggering 7-10 hours every other day saved from not having to go fetch water far away or bring animals to drink).

We also found several completely unexpected benefits: resources + time savings generated in harmony and peace. Women reported far more inter-ethnic harmony thanks to collaboration across tribes during the sheep management training and water sharing, and ethnic groups attended each others marriages and baptisms.  Households also were far more at peace, some saying "our husbands don't beat us anymore", thanks to increased respect, cleanliness and their ability to be home for their husbands, children and mothers-in-law. Men reported that they sat with women by project's end and there was more intra-household collaboration.  Were these planned at all? No! We need to return to learn about what our work engenders, and bring those lessons forward, see if they're replicated or not. What else has emerged in the years since the project ended? What was valued enough to be sustained by the communities themselves?

Finally, a fascinating flaw in our logic which is interesting for international development staff to consider was whether our participants shared the two large goals at all (drought resilience and sustained food security). Some women sold the sheep to buy food, pay their childrens' school fees or their daughters' dowries, even buy themselves beds or pots and pans immediately.  Some had their sheep sold by their husbands who used them to buy other animals, pay for ceremonies or other expenses.  Spending assets on immediate needs is not at all illogical for a community who can feed itself only 4 months a year; for some households, their pressing needs far outweighed the luxury to wait and buffer seasonal food insecurity way down the line. So while overall the project brought benefit – many saying they didn't have to resort to worse survival strategies during the next hungry season- it illuminated that donors' goals may differ greatly from participants'.  These people didn't sign a contract agreeing to abide with donor expectations, yet that is what the evaluation looked for. We need to learn not to assume, and instead explore what goals they do have as expectations of impact.  Looking beyond within useful but narrow 'boxes' supported but limited by logical frameworks of inputs-outputs-impacts can help us learn what communities really value and what they got from what we offered.

Valuing their voices is key. What projects have you seen voices valued? What have you learned?