In “Ideas we’re not ready for are the ones we need most,” posted here last December, Barbara Geary Truan highlighted the work of the South African Wilderness Foundation’s Umzi Wethu programme as “embodying the human approach” to development. As a core member of the Project Management Team at Umzi, I was struck by these words as they so aptly describe the heart of our approach. We’re often at a loss to describe ourselves as we find our focus locked on the daily realities of the “who” rather than the “what” and “how”.

Umzi Wethu fulfils the employability potential of resilient, motivated youth displaced by HIV/AIDS and poverty by using the power of the wilderness, promoting personal wellness in a nurturing home context, providing credible training, and securing sustainable job placements in hospitality and eco-tourism establishments while extending the program's social outreach to others.

I’m often asked how we go about ensuring the ongoing success of the programme. At the time of writing, Umzi Wethu continues to boast an 85% job placement rate for over 200 graduates and is currently on its 17th intakes of students. There is no short answer about how we do this, but in subsequent posts I will reflect on some key aspects of the work which go into the long term sustainability of what we do. 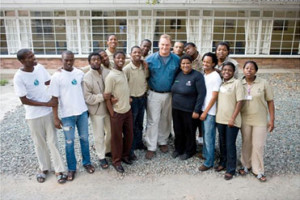 When Umzi Wethu began in 2007, it was ground-breaking for a number of reasons, not least of all in its intention to produce seriously life changing outcomes with a fairly small number of specially selected youth in a relatively short space of time. This highly concentrated approach is in contrast to what is usually expected in development work, where reaching as many people as possible through service delivery is often where the work is focused. If we think of this in terms of Maslow’s hierarchy of needs, the classic development approach seeks to ensure the basic physiological and survival needs of food, water, shelter and primary health care which is much needed but often leaves individuals dependent on others to provide for themselves.

Umzi Wethu began as a bold leap to leverage opportunities for employment in the high status world of luxury game reserves and hotels for the benefit of disenfranchised young people who would not ordinarily be encouraged to aspire to these heights. Perhaps there is something unique in the organisation’s belief in young people’s ability to reach beyond their wildest dreams after only one year. We’ve subsequently heard stories from our students who shared how the experience of training and working in prestigious establishments provided a huge boost to their own personal sense of self-esteem and achievement which had previously been eroded by a perceived lack of access to even the most basic opportunities. One thing that we hold to is an unashamed belief in just how amazingly far young people can go in 12 months when given a caring, supportive home environment and opportunities to get hands on experience in the workplace.

With Umzi, the Wilderness Foundation creatively designed a fully holistic model – residential, vocational, emotional, environmental, etc. – which aimed to tackle almost every aspect of each individual student’s life over the course of one year. In doing so, the Foundation took on the challenge of touching on all levels of Maslow’s model in order to provide the foundation for a level of self-actualisation not usually associated with young people from such vulnerable backgrounds. You see what I just did there: they are not “vulnerable youth”. They are incredibly motivated and resilient youth who have been stuck in stories of vulnerability and despair – a conversation we have with our students from day one.

Such a perceptual turnaround is no mean feat, and while a well conceptualised project model together with carefully constructed monitoring, evaluation and learning processes was key, there is definitely something more to the Foundation’s approach than meets the eye. How we view the “who” aspect of our work has been a key factor in this success from the outset. It touches on the very intentional way in which we come together as partners to create stories of belonging and self-esteem that lead our students to a future of success and achievement which they’d not previously believed possible.

In the next piece I will unpack the “who” in more detail by focusing on a few key observations which have been made about the personal aspects of the work we do.

Paul Longe is a qualified Counselling Psychologist working in Port Elizabeth, South Africa. He has been working with the Wilderness Foundation, a global conservation organisation, on the development and implementation of innovative and holistic socio-economic development projects for vulnerable youth in South Africa since 2008.

Some ideas precede and shape reality, the ones that lie behind everything we create. Other ideas lag behind an often hidden reality: they seek then find it. Galileo Galilei observed the skies for years before coming up with the notion that the earth was revolving around the sun. Both kinds of ideas have something essential to offer development professionals today.

The first tells us that if we can envision a world without poverty, we can create it. But it also begs the question of why, in spite of the last 50 years of development work, more than a billion people today live on less than $1.25, putting them below the internationally accepted norm of extreme poverty. This, I think, is where the second kind of idea comes in.

If we gaze at the development skies, we might begin to sense a centre around which both poverty and wealth rotate; we might come to recognise these opposites as distinct faces of the industrial revolution and the mechanistic thinking that underpins it.

With machines (technology, automatic process) as the ground of our systems, the reigning values are: mass production, identical forms, standard measurements. And the requirement is: unlimited consumption, both of raw materials and finished products. An unintentional result is that the system tends to overlook and undervalue a whole set of powerful variables and realities – those which are distinctly human.

What would happen if we allowed development thinking to cut itself loose from the tentacles of a mechanised view of the world? What if, for example, we introduced a quality like humility – the kind of humility Galileo experienced when gazing at the skies – into our thinking? What if we concentrated as much on what we don’t know as on what we do know? What if we threw out the molds and conveyor belts of development initiatives and decided to let it be an exclusively human endeavour?

I think if we had the courage required for such an undertaking, three exciting things would happen:

1. We would shift the order of the “five Ws”: what, where and when would play second fiddle to WHO and WHY. To stop assuming that these last two questions always have the same generic answers (“poor people” and “we want to help”) can be powerful. These assumptions become labels and labels become reductionist. Making them more specific opens wide two windows of possibility we often forget are there. A specific and thus enriched “who” automatically introduces collaboration, partnership and diversity into our work. A deeply specific, clearly articulated “why” has the potential to keep it honest.

2. We would shift our thinking about time: when time becomes human, we notice two things. First, we get to be in charge of it. Paying attention to detail, allowing time for deep thinking while planning, or shifting time frames to accommodate reality during a project, all give us sovereignty over time. Secondly, we would notice that creating wealth and health where poverty and illness have installed themselves takes time. Put simply, development projects that take a long view are the only ones that really work because, as in any relationship, commitment is a game changer.

3. We would see a different picture: when we allow development to be human, we begin to see and understand the human beings who have the most at stake in the process. And when we meet and know them, we look beyond the mere context of their lives to see how they live their lives. When we do this we see vast – seemingly unlimited – amounts of creativity, ingenuity, intelligence, courage, fortitude, to name just a few notable human qualities for which there are no standard measures.

These ideas aren’t theoretical. A few of the finest development initiatives I know of embody the human approach. In northwestern India, in a geographically isolated region with limited resources, an organisation called Shrujan has been quietly creating wealth and helping artisans sustain themselves while nurturing an integral part of their culture for almost fifty years. In South Africa, a project known as Umzi Wethu has come up with an original, dynamic and transferrable model for completely turning around the lives of vulnerable youth.

There are other examples like these. Valuing Voices exists to celebrate them and to encourage development professionals to look at them carefully and imitate what makes them so successful. Such work whispers of an unmoving sun, nudging us to imagine that there just may be another centre somewhere else in the sky: maybe even right in the heart of the enormous potential of what we label “poor”.

When Jindra invited me to write this blog, she mentioned that at a recent conference on development monitoring and evaluation, someone told her that Valuing Voices was an idea for which people were not yet ready. Hurray, I thought. That means she must really be on to something great.

Barbara Geary Truan holds a master’s degree in international relations from the Fletcher School. She worked for six years at the International Federation of Red Cross and Red Crescent Societies, and for over a decade as an evaluator for a philanthropical initiative that supports original working projects designed to better the world.